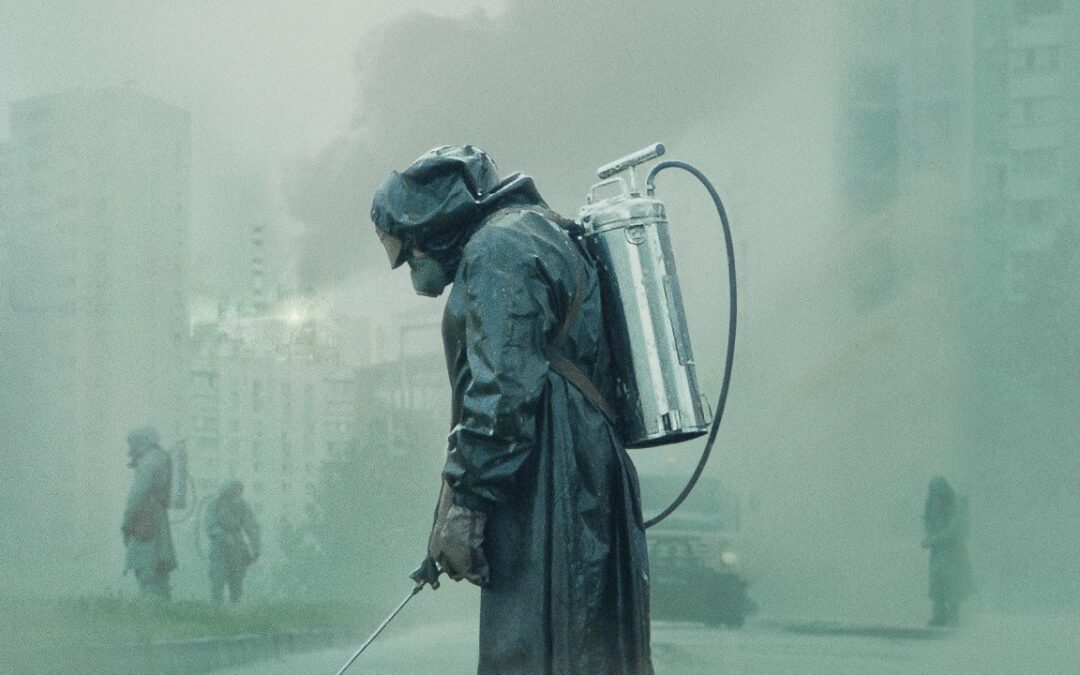 Prompted by a TV series that is based on a true story, I would like to use this disaster as a point of reference in order to make associations with the issue of workplace bullying. When we are bully targets and suffer mobbing in our work environment, it is as if we are in ‘Chernobyl’. This nuclear power plant in present-day Ukraine is located in the city of Pripyat of the former Soviet Union.

When the nuclear reactor [the soul of the power plant] exploded, the reactor crew chief ignored the erroneous measurements and assumed that the reactor had remained intact. [When our soul ‘explodes’, we ignore the alarm signals it transmits in the false belief that our soul is ‘intact’]

The fire inside Reactor no.4 continued to rage until the intervention of helicopters that dropped sand, lead, clay and boron onto the burning reactor. [ Friends who will be willing to help us will also use ‘water and sand’ but this will not stop the fire from burning]

The explosion and fire threw hot particles of the nuclear fuel and also far more dangerous fission products, radioactive isotopes such as caesium-137, iodine-131, strontium -90 and other radionuclides into the air.

[When the soul is on fire, the series of explosions drive toxic substances deep inside us. Here, the radioactive materials translate to depression, post-traumatic stress disorder and autoimmune diseases.]

In the early hours of 27 April, more than 24 hours following the explosion, the investigation commission  had ample evidence that extremely high levels of radiation had caused a number of cases of radiation exposure so they had to admit to the damage of the reactor and proceed with the evacuation of the city of Pripyat. [It is like admitting to the damage inside your own ‘reactor core’ and proceeding with the evacuation of your soul and emotions. It is when you admit to the false accusations against you that are made by the bully]

The water that was used in a futile attempt to put out the fire had flooded the floor of the reactor. The smoldering fuel and other material had started to burn through the floor and mix with molten concrete from the reactor lining, creating a radioactive semi-liquid material comparable to lava. This was aggravated by the material dropped by helicopters which acted like a furnace, increasing temperatures even more. If this material came to contact with water, it would result in a steam explosion that would potentially be more serious than the initial reactor explosion. [Your well-intentioned friends are bound to give you advice and you will feel compelled to follow it. Unfortunately, the aftermath may be as catastrophic as that of the effort made to put out the fire in the Chernobyl reactor. Instead of putting out the fire, the advice of a friend may lead to a more radioactive explosion in your soul, just like water and other material coming into contact]

To avoid the worst, the government sent soldiers and workers (the so-called ‘liquidators’) to clean up the contaminated zones. [This is what you should do: Reach out for help from specialized professionals that will guide you on how to avoid and manage workplace bullying and mobbing]

The most dangerous radioactive waste was gathered in what was left of the reactor building. The reactor building was then covered with sacks containing sand, lead and boric acid that were dropped by helicopter (approx. 5,000 tonnes in the week after the accident). By the month of December, 1986, a massive cement ‘Sarcophagus’ had been constructed in order to seal the reactor and its contents.

[No man should ever build a ‘sarcophagus’ to encase themselves in. If they do so, they will cut themselves off of their family, their work, their fellow men. They will be cut off of their own lives.]

The prevention and management of workplace bullying is a personal decision. Why not learn from the Chernobyl disaster and use it as a case of errors and dire consequences that we can avoid in our lives? Isn’t it something we owe to our soul and to ourselves?

Source: Text and facts about the Chernobyl disaster were used from Wikipedia.